Mention the name Barcelona to most in Europe, if not the world, and images of a thriving, cosmopolitan beachside city come to mind, along with the architecture of Gaudi and a certain football team based in its midst. Yet this vibrant, cultured metropolis, often cited as Spain’s economic powerhouse in more prosperous times, has succumbed to the ravages of Covid-19 like the rest of us. For one group of its 4.6 million inhabitants – the homeless – this has been a particularly troubling time. After all, how do you self-isolate without a place to live?

In terms of the impact of the global pandemic we are all currently experiencing, Spain is one of the hardest hit countries on the planet. I’ll spare you the figures, as I think we are all tired of these sobering statistics dominating our media, but it’s bad. So bad, in fact, that as of late April, only two other countries (United States & Italy) have had more deaths due to the Coronavirus than the Spanish have suffered.

In response, the Spanish Government has implemented some of the most severe lockdown rules in Europe. For example, children under the age of 16 have not been allowed out of their homes – even to exercise – since mid-March, and adults have been confined to their own four walls apart from to get essentials like food and medicines. At the time of writing, these restrictions are slowly being lifted , but it’s been a long few weeks for Europe’s fourth largest nation.

I’ve gained this understanding of current life in Spain due to an old school friend of mine – Robert – who is a resident of Barcelona and currently works for local homeless charity Arrels Fundacio in the city. During a recent video conversation (all the rage in these days of isolation), he explains to me how his role involves walking the streets of his adopted hometown to engage with the city’s homeless population. As such, Robert is one of the few people allowed to be outside on a regular basis – for which he needs a permit – and his insights into the plight of the city’s homeless residents are fascinating yet unsettling at the same time.

One of the most confronting consequences for Barcelona’s homeless population Robert shares, is how being some of the only people on the street has resulted in increased attention from the local police. With everyone requiring permits to justify why they aren’t isolating at home, the homeless have been regularly questioned by law enforcement just for being there. As Robert explains, this has led to “increased anxiety for many I’ve come to know over the years”, some of whom, due to cognitive and mental health issues, have little comprehension of the current restrictions.

A case in point, he tells me, is Patricia*, a 49-year-old lady who has been on the streets for “over 7 years”. She has confided in Robert of being “scared of police attention” and embarrassed to admit she has nowhere to go when they question why she isn’t at home. The streets are her home, and it’s only the onset of the Coronavirus pandemic that has made her plight more visible, which is hardly her fault. Fortunately, Robert’s employer is able to assist in any ‘misunderstandings’ with law enforcement, and regularly succeed (at least recently) in getting spot fines for the homeless rescinded. Yet one assumes that the mental toll on these already vulnerable people is more difficult to eradicate.

In defence of the Spanish authorities, they have rushed to implement measures to assist the homeless during these extraordinary times, with an increase in ready-made ‘picnics’ (cold meats, bread and cheese) being distributed over recent weeks. However, this has only papered over the cracks of the problem, merely replacing the ‘soup kitchens’ forced to close their doors because of the crisis, and the lack of hot food is a serious problem for many. 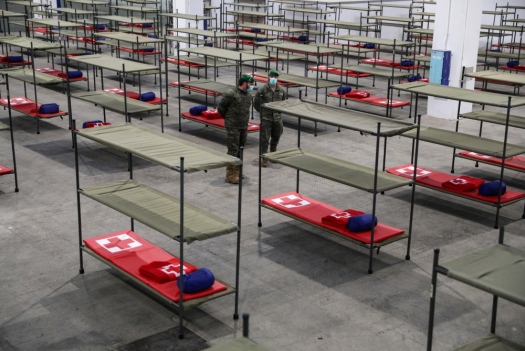 One of the highest profile Coronavirus solutions for the homeless in Barcelona has been the temporary homeless shelter erected by the Spanish military in the iconic Plaza de Espana. Built in just three days and offering temporary accommodation for up to 450 people, it’s a symbol not only of the efforts of the Spanish Government to keep the homeless off the streets, but also the extent of the problem. Having spent 11years working with the city’s homeless population (which numbers in the thousands by recent estimates), Robert is appreciative of this temporary solution, but also slightly cynical. “It’s great in principle” he concedes, “but many don’t want to share their plight with hundreds of strangers, and it’s not exactly ideal for social distancing.”

This is highlighted in a second example Robert gives of his recent interactions with the city’s street dwellers, as he describes his conversation with Juan* – a 42-year-old male currently living in a doorway. Having lost his job as a result of the pandemic (and the inevitable economic downturn that swiftly followed), Juan has resorted to sleeping rough in an attempt to get by, a harsh reality in a society crippled by austerity measures in recent years. When asked by Robert whether he was aware of the new temporary accommodation option in Plaza de Espana recently, his response is telling. “I feel safer in this doorway” he replies, citing the risk of infection as a primary factor in his decision to stay where he is for now.

Clearly there are no easy solutions to this age-old problem, and the current pandemic has only exacerbated the issue, making homelessness more visible yet no less difficult to solve. I ask my friend for his professional opinion on what he would like to see done to address the issue and for once am not surprised by the answer. “More preventative measures are needed – such as better co-ordination between landlords, local authorities and those in need – but that has been known for years” he explains passionately. “The problem, as usual, is funding to do this and the political will to solve the issue.”

Until now, he explains, homelessness has been too easy to ‘sweep under the carpet’, especially in a country that has had severe economic problems to deal with, dating back to the Financial Crisis of 2008. It’s heartbreaking for Spain that just when they were starting to see the green shoots of economic recovery in terms of a falling unemployment rate , this health related crisis has stopped them in their tracks. With the federal government’s focus understandably on how to get people back to work once the pandemic is over, it’s questionable at best whether homelessness will factor into the conversation. “At least this lockdown has raised the profile of the homeless here, and hopefully that’s a good thing” he offers positively. If every cloud has a silver lining, then this one is a particularly thin sliver…

As our conversation ends and we sign off with the now familiar refrain for our respective families to “stay safe”, I can’t help contrasting the experiences I’ve just heard with the scenario in Australia. It’s been a challenge here too, with little or no access to friends and family, some of whom have lost jobs during this time, but at least everyone I know has a roof over their heads. When we look back on this time in years to come, let’s hope we are thankful for such small mercies, and remember those overseas who weren’t quite as lucky..

[*names have been changed to protect the identify and dignity of the individuals highlighted in this article.]

This article was republished in Independent Australia on May 10 2020, a copy of which can be found here